ACCLAIMED actress Vidya Balan has added the much needed girl power to Bollywood with strong performances in films that have smashed glass ceilings and expanded the horizons of the Hindi film heroine.

The multi-award winning star continues her remarkable run of really powerful roles with new movie Shakuntala Devi, where she plays the title role of the world famous woman known as the human computer. The Bollywood biopic sees the amazing actress play the woman with the extraordinary mind. This continues an action packed career for one of the most important stars in this generation.

Eastern Eye decided to get you a little closer to Vidya Balan by presenting an all you need to know A to Z about her.

A is for Awards: The acclaimed actress has earned many accolades and gained a massive number of nominations for her impressive body of work, which includes winning Best Actress honours at all the major Bollywood award ceremonies. Films she has won multiple Best Actress awards for include Kahaani, Paa, Ishqiya and The Dirty Picture. Her other honours includes the Padma Shri, which is India’s fourth highest civilian award.

B is for Biopics: The actress has played a number of characters based on real life people in films, including starring in biopics The Dirty Picture and her first 2020 feature film release Shakuntala Devi. Her other films based on real events include critically acclaimed hits No One Killed Jessica and Mission Mangal. 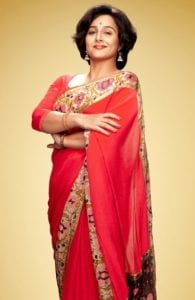 C is for Cannes: Vidya was given the honour of serving as a jury member at the 2013 Cannes Film Festival for the main competition. She was part of a very high-profile nine-person jury that included Steven Spielberg, Nicole Kidman and Ang Lee.

D is for Debut directors: The actress has worked with first-time directors a number of times in her career, including for the films Parineeta (Pradeep Sarkar), Ishqiya (Abhishek Chaubey), Bobby Jasoos (Samar Shaikh) and Tumhari Sulu (Suresh Triveni).

E is for Extra: The actress has always gone beyond her work commitments to support various charities and social causes. These include ones empowering women, helping impoverished children, supporting environmental causes and raising awareness about sexual abuse.

F is for First film: After a number of cancelled projects, Vidya finally made her big screen debut in award-winning 2003 Bengali film Bhalo Theko.

G is for Girl power: Vidya’s portrayal of strong protagonists in Paa, Ishqiya, No One Killed Jessica, The Dirty Picture and Kahaani helped break the stereotypical portrayal of heroines in Bollywood. She earned the title of a ‘female hero’ and inspired other leading ladies to take on more powerful roles.

H is for Hum Paanch: Vidya was just 16 when she landed a role in legendary Indian sitcom Hum Paanch. However, the talented teenager refused further television offers because she had her heart set on a film career.

I is for Indira Gandhi: Although she has acted in various biopics, the real life character Vidya has most wanted to portray is politician Indira Gandhi. She has agreed to star in and produce a web-series based on the late Indian leader.

J is for Jayalalitha: The actress has refused a number of high-profile projects and that reportedly includes playing actress turned powerful politician J Jayalalithaa in a big budget biopic, which Kangana Ranaut is now doing.

K is for Kahaani: The biggest sleeper hit of 2012 was an unpredictable thriller that won rave reviews and clocked up huge numbers at the box office. One of the decade’s best movies, resulted in Vidya winning Best Actress awards for a fourth year in a row.

L is for Languages: The multi-talented actress has appeared in Hindi, Tamil, Telugu, Bengali, Malayalam and Marathi films.

M is for Modelling: Films she had signed getting cancelled in the early days of her career led Vidya to appear in TV commercials and a number of high-profile music videos, including for the band Euphoria. The modelling career finally led to her big Bollywood break in Parineeta.

N is for N.T.R: The actress played a key role in big budget Telugu biopic N.T.R. Kathanayakudu and its sequel N.T.R: Mahanayakudu, which were based on the real life and acting career of film legend turned politician NT Rama Rao. They would be the most high-profile films that she has done away from Bollywood.

O is for Outer space: In 2019, she played a key character in hit film Mission Mangal, which was based on scientists involved in India’s first interplanetary expedition and arguably delivered the best performance in the multi-starrer.

P is for Parineeta: The actress made an award-winning debut in successful 2005 film Parineeta, but it almost didn’t happen. Producer Vidhu Vinod Chopra had wanted an established actress, but after six months of tests and over 70 auditions, Vidya landed the role in the big screen adaptation of Sarat Chandra’s classic 1914 novella. She won multiple Best Debut awards for her performance in the film.

Q is for Quality time: When Vidya is not working her priority is to spend quality time with her husband and sister’s kids. Her other passions away from work include travelling, reading, binge watching a good TV series and listening to old Hindi music.

R is for Radio host: The actress has successfully played a radio host twice on the big screen. The first was for smash hit film Lage Raho Munnabhai (2006) and then 11 years later with an award-winning performance in Tumhari Sulu (2017).

S is for Sari: The actress has popularised the traditional sari globally in a way no other leading lady has done and in the process become a powerful ambassador for Indian women. She has regularly worn a sari at high-profile events around the world and once said, “I could live in a sari”.

T is for Turning point: After a rollercoaster start of ups and downs in Bollywood, the big turning point came for the actress was an award-winning performance in Paa (2009), where she played a single mother struggling with her son’s (Amitabh Bachchan) progeria. This led to a golden run and helped create a new kind of commercial Hindi film heroine.

U is for Unlucky: She may be an in-demand star today, but the actress had an unlucky start to her film career. A massive number of films she signed in Malayalam and Tamil cinema were either shelved, didn’t get a release, were cancelled without notice or she was replaced by someone else.

V is for Vegetarian: The actress has always been a vegetarian. PETA evennamed her the hottest vegetarian two years in a row.

W is for Wedding: Vidya announced she was dating film producer Sidharth Roy Kapur in May 2012 and then on December 14 of that year married him in a private ceremony in Mumbai.

Y is for YouTube: The actress produced and starred in 2020 short film Natkhat, which revolved around a mother teaching her young son about gender equality and premiered on YouTube, as part of We Are One: A Global Film Festival.

Z is for Zero: The actress smashed the size zero trend in Bollywood and even put on 12 kilos for her role in The Dirty Picture. By reintroducing the real woman into cinema, she changed everything, including redefining what sexy really is, empowering women and inspiring a new generation to not follow the crowd.

Shakuntala Devi is available on Amazon Prime from July 31

Birthday Special: From Hawa Hawai to Dola Re Dola, here’s a list of top 5 songs of Kavita Krishnamurthy

Shahid Kapoor to start shooting for his web series soon

3 Years of Padmaavat: Ranveer Singh and Deepika Padukone share behind the scenes videos

Birthday Special: From Hawa Hawai to Dola Re Dola, here’s a...

Shahid Kapoor to start shooting for his web series soon

3 Years of Padmaavat: Ranveer Singh and Deepika Padukone share behind...