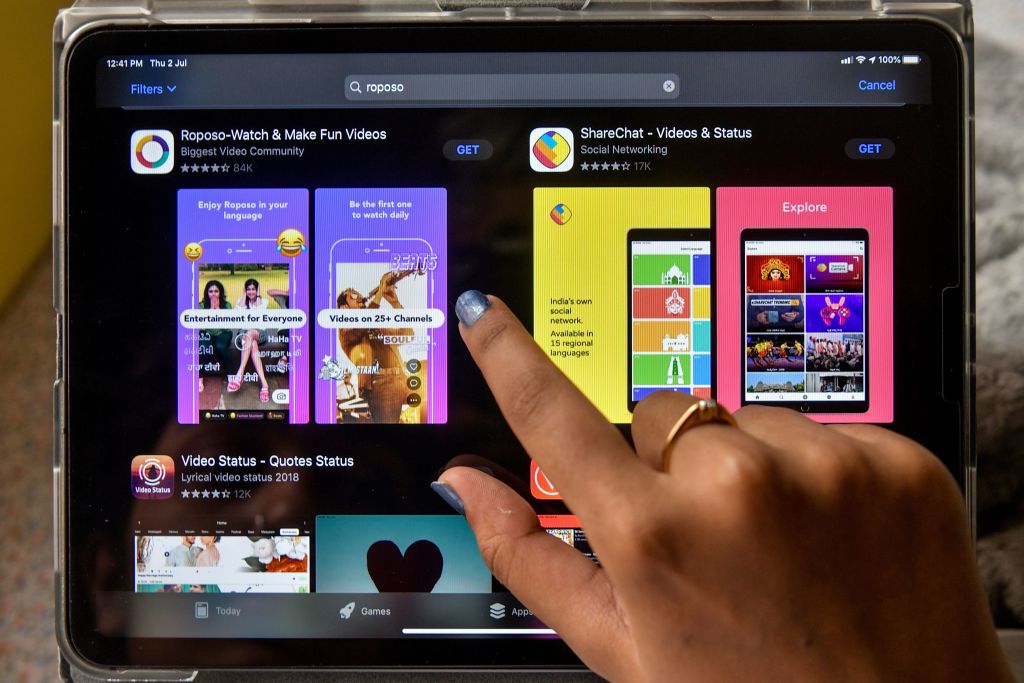 FILE PHOTO: A woman browses on an online store the Indian app platforms Roposo and Sharechat in Bangalore on July 2, 2020. (Photo by MANJUNATH KIRAN/AFP via Getty Images)

MORE than two months after TikTok was banned in India, homegrown apps are enjoying the spike in the number of users as former ‘stars’ try new tricks to rebuild their fan base.

On June 29, Indian government banned 59 Chinese apps, including TikTok, leaving over 200 million users of the short video app feeling a little bereft and many lost their earnings.

In January, 24-year-old beatboxer Jesus Mehta joined TikTok to showcase his beatboxing talent. A year later, he had a following of over two million. His earnings also increased significantly.

But his earnings stopped after the government banned the Chinese app two months ago.

He is now trying to rebuild his fanbase on Instagram and has so far got a little over 17,000 followers.

There are also homegrown apps, including Chingari, Roposo, Rizzle and Instagram Reels, many TikTok creators are still looking for the right platform.

But they will have to start from scratch and wait for a long time before money starts coming in. Yamuna Nagar-based TikTok creator Abheshek Garg said there are plenty of options available to create content but nothing comes close to TikTok in terms of audience reach and monetary benefits.

“A lot of people were actually relying on TikTok for their bread and butter. So it has been a huge setback. The reach that platform had was immense. No application comes close to that,” Garg, a fashion and travel blogger who had over a million followers on TikTok, said.

Though several similar apps existed in India along with TikTok, it was only after the ban that they registered a sudden spike in new users. Roposo, a leading short-video platform in India, was launched in 2014.

While it already had over 50 million downloads on Google Play Store, another 40 million users downloaded the app in the next two months after the TikTok ban.

According to Bikash Chowdhury, chief marketing officer of Glance, the parent company of Roposo, the application was already at the number one spot on the Google Play Store in the social app category in mid-June.

“Additionally, a few weeks back we introduced the Pride of India programme, a collaboration with Indian achievers like Babita Phogat, Chandro Tomar, Neel Ghose and Sangram Singh. The programme provides a platform to them to mentor and inspire fellow Indians,” he said.

Vidya Narayanan, CEO and co-founder of Rizzle which was launched in June 2019, also believes it wasn’t the TikTok ban that made the app popular but the content by its creators who continue to “set new records and inspire new creators to join the tribe”.

Since the ban on the popular app, some leading ‘TikTokers’, including Khushi Punjaban, who had over 18 million followers for her comedy and dance videos on the banned app, model Neetu Bisht with nearly seven million followers, and chef Rashika Punjabi with 2.8 lakh followers, joined Roposo.

Sumit Ghosh, founder of Chingari, sees the scattered migration of top TikTok creators as an opportunity for short-video companies to coexist and even grow together.