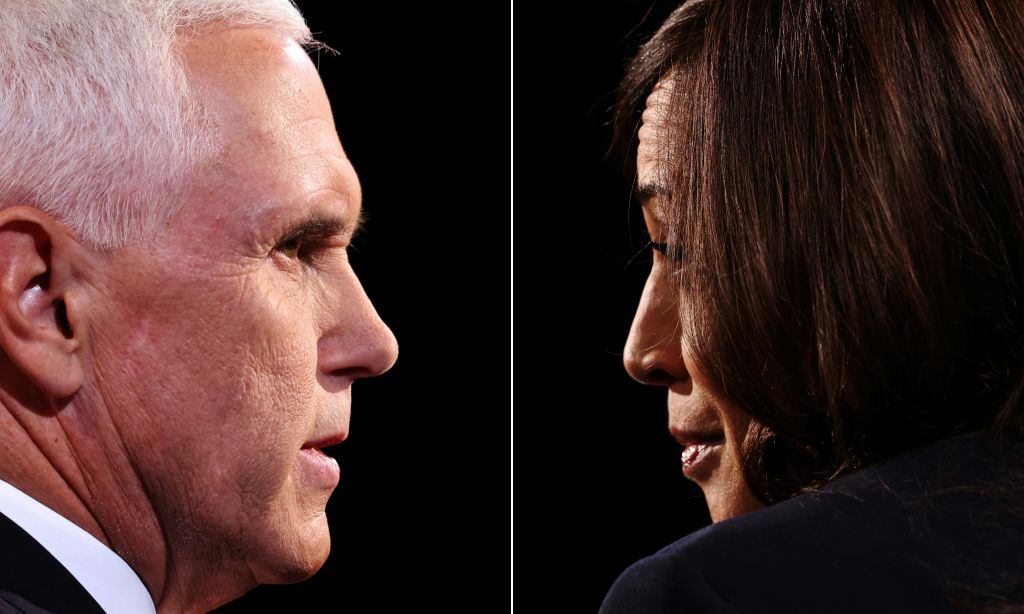 This combination of pictures created on October 07, 2020 shows US Vice President Mike Pence and Democratic vice presidential nominee and Senator from California Kamala Harris during the vice presidential debate in Kingsbury Hall at the University of Utah on October 7, 2020, in Salt Lake City, Utah. (Photo by JUSTIN SULLIVAN/POOL/AFP via Getty Images)

TRUMP administration’s handling of the coronavirus pandemic was the major topic of discussion during the VP debate on Wednesday(7) between US vice president Mike Pence and Democratic challenger Kamala Harris.

“The American people have witnessed what is the greatest failure of any presidential administration in the history of our country,” Harris said as the debate began at the University of Utah in Salt Lake City.

Harris, the California US senator and former state attorney general, immediately went after Trump’s record on the pandemic that has claimed 210,000 American lives and devastated the economy.

In response, Pence blamed China for the pandemic and touted the US administration’s efforts to battle the disease, including Trump’s decision in late January to restrict travel from the pandemic’s epicentre in China.

“I want the American people to know that from the very first day, president Donald Trump has put the health of America first,” he said. “China is to blame for the coronavirus, and president Trump is not happy about it,” he added.

The two candidates were separated by 12 feet (3.6 meters) and plexiglass shields, a reminder of the virus that has led to the largest public health crisis in a century.

Trump’s Covid-19 diagnosis, along with his age and that of Biden, added weight to the debate, as both Pence, 61, and Harris, 55, sought to demonstrate they were capable of assuming the office if needed. Either the Republican Trump, 74, or Biden, 77, would be the oldest U.S president to be sworn into office if victorious in November.

Pence was questioned about the administration’s White House event last month announcing Trump’s latest supreme court nomination, where masks and social distancing were mostly absent. A number of prominent attendees, including the president himself, have since tested positive for Covid-19.

The vice president noted that the event was outdoors before criticising Harris and Biden, who have promised to mandate masks on federal property and encourage the practice nationwide, for not respecting people’s freedom to make their own choices on health.

“You respect the American people when you tell them the truth,” Harris retorted, noting that Trump played down the virus for months.

After tested positive for Covid-19 last week, Trump was hospitalised for three nights but returned on Monday(5) to the White House, where the virus has infected dozens of members of his inner circle.

Harris faulted the Trump administration for trying to invalidate the Affordable Care Act (ACA) healthcare law in the midst of a pandemic and assailing Trump for reportedly paying $750 a year in federal income taxes as president.

Pence called the ACA, popularly known as Obamacare, a “disaster.”

The US Supreme Court is scheduled to hear arguments over the law a week after the election. Republicans are working to seat Trump’s conservative nominee to the court, Amy Coney Barrett, by month’s end over the objections of Democrats.

Pence sought to counter Harris’s attacks by turning the focus to the economy and tax policy, saying: “On Day One, Joe Biden’s going to raise your taxes.” Harris responded by saying that Biden has vowed not to raise taxes on anyone making less than $400,000 a year.

The vice president also asserted that Biden would ban fracking and embrace the Green New Deal, a massive environmental proposal backed by liberal Democrats. Biden, however, has rejected both of those positions.

Asked about a potential vaccine, Harris said she would only trust the word of scientists, rather than that of Trump, who has promoted unproven treatments in the past.

“If the doctors tell us that we should take it, I’ll be the first in line to take it, absolutely,” she said. “But if Donald Trump tells us to take it, I’m not taking it.”

Pence fired back, accusing Harris of undermining public confidence in vaccines. “I think it is unconscionable,” he said. “Stop playing politics with people’s lives.”

Harris, the first Black woman to serve on a major-party presidential ticket, also attacked Pence on race relations, criticizing Trump for turning down an opportunity to denounce white supremacists at last week’s debate with Biden.

In response, Pence accused the media of taking Trump’s words out of context and said the president had repeatedly disavowed racist groups.

Harris, who was on the biggest stage of her political career, is the daughter of immigrants from Jamaica and India and the first person of Asian descent on a major-party presidential ticket, as well as the first Black woman.

Biden leads Trump in national opinion polls and has an advantage of 12 per cent points in the latest Reuters/Ipsos survey of likely voters.

It was the only vice presidential debate of the campaign. Biden and Trump are due for a rematch on Oct. 15 and 22.

Bettors on British exchange Smarkets give Biden a 66 per cent chance of winning the election, down from 68 per cent before the debate. Trump’s chances rose to 33 per cent from 32 per cent.

Keshubhai Patel: The man who helped build BJP from scratch in Gujarat

Keshubhai Patel: The man who helped build BJP from scratch in...