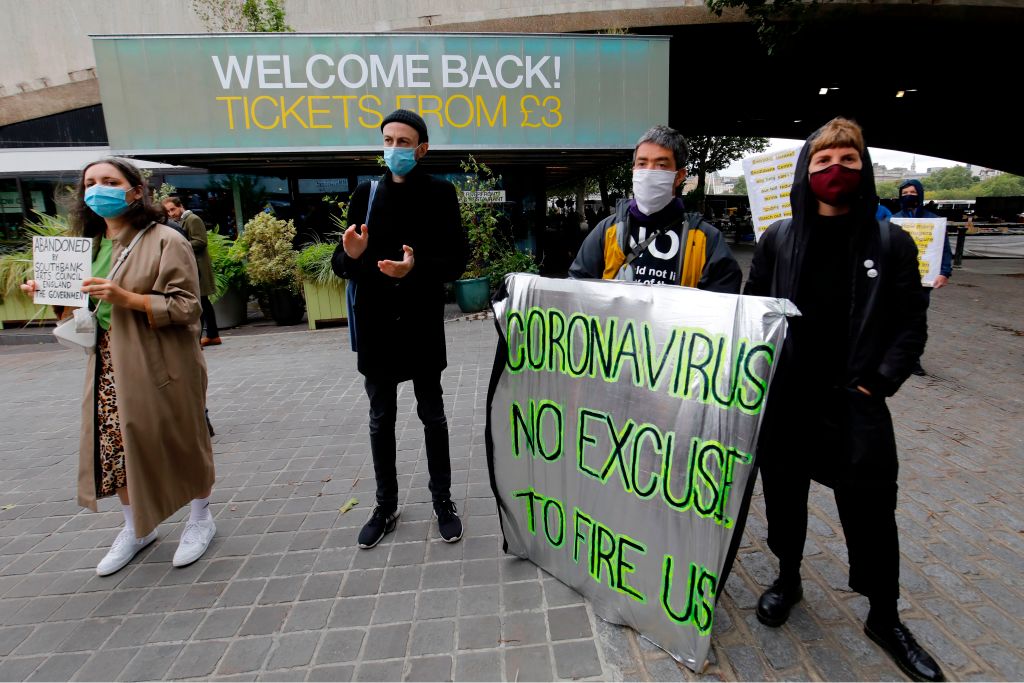 FILE PHOTO: Protesters gather outside the National Theatre on the south bank to ask for fair redundancy payouts and preferential rehiring for casual staff, in London on August 29, 2020, after The National announced it’s decision to cut all of its 400-strong casual staff. (Photo by TOLGA AKMEN/AFP via Getty Images)

BRITAIN’S unemployment rate rose for the first time since the coronavirus lockdown began in March, sending a warning signal ahead of an expected surge in job losses when the huge government job subsidy programme of furlough expires next month.

The unemployment rate increased to 4.1 per cent in the three months to July from the 3.9 per cent it had clung to since early 2020.

The government’s coronavirus job subsidy scheme has shielded millions of workers and there were fewer job losses than feared in the figures published on Tuesday (15).

Redundancies increased by 48,000 on the quarter to 156,000, the biggest rise in over 10 years, but the level remained well below that seen during the 2008 downturn.

A single-month estimate for the unemployment rate – which is more timely but less representative than the three-month data – jumped to 4.4 per cent in July and an experimental weekly estimate hit 4.8 per cent in the last week of the month.

Separate tax office data showed the number of staff on company payrolls fell by a monthly 36,000 in August.

That was more than job losses of 20,000 in July, but still only a fraction of mass layoffs in April and May. The ONS had previously reported 114,000 job losses for July, but revised this down sharply after receiving more data.

Similarly, official data for the three months to July showed a much smaller-than-expected fall in the number of people in employment of 12,000. However, the Office for National Statistics said its figures might be “slightly impacted” by a change in the way it interviews households since the Covid-19 pandemic swept Britain.

The surveys, which now rely on telephone calls rather than face-to-face interviews, over-represent homeowners who are less at risk of unemployment, the ONS said.

“With the number of employees on the payroll down again in August and both unemployment and redundancies sharply up in July, it is clear that coronavirus is still having a big impact on the world of work,” noted ONS director of economic statistics Darren Morgan.

However, the huge drop in jobs is being partially offset by the food sector employing thousands of workers as Covid-19 pushes people to increasingly shop online.

US group Domino’s Pizza has announced it is creating 5,000 jobs, while the biggest recruitment drive has come from supermarket giant Tesco, which is adding 16,000.

“Some effects of the pandemic on the labour market were beginning to unwind in July as parts of the economy reopened,” added Morgan at the ONS.

“Fewer workers were away on furlough and average hours rose. The number of job vacancies continued to recover into August, too.”

Sterling briefly rose after the data was published. The Bank of England has forecast that the unemployment rate will hit 7.5 per cent at the end of this year, when it is expected to expand its bond-buying stimulus programme again.

Chancellor Rishi Sunak said protecting jobs and helping people back into work was his “number one priority”.

He is under pressure to come up with new forms of support for workers as his job protection programme is wound down, such as subsidies targeted at workers in sectors most hit by social distancing rules.

“Sadly the pandemic isn’t scheduled to end in October, nor should the support for jobs and livelihoods.”

The number of job vacancies rose to 434,000 in the three months to August, about 30 per cent higher than in the April-to-June period but almost half their level before the pandemic.

Companies in sectors such as tourism and high-street retailers have announced major job losses.

London’s City Airport said on Monday (14) it needed to cut up to 239 jobs or 35 per cent of its staff, echoing expected staffing reductions at Heathrow. Britain’s biggest domestic bank Lloyds is making 865 redundancies.

‘War of words’ between India and Pakistan over Imran Khan’s UN...