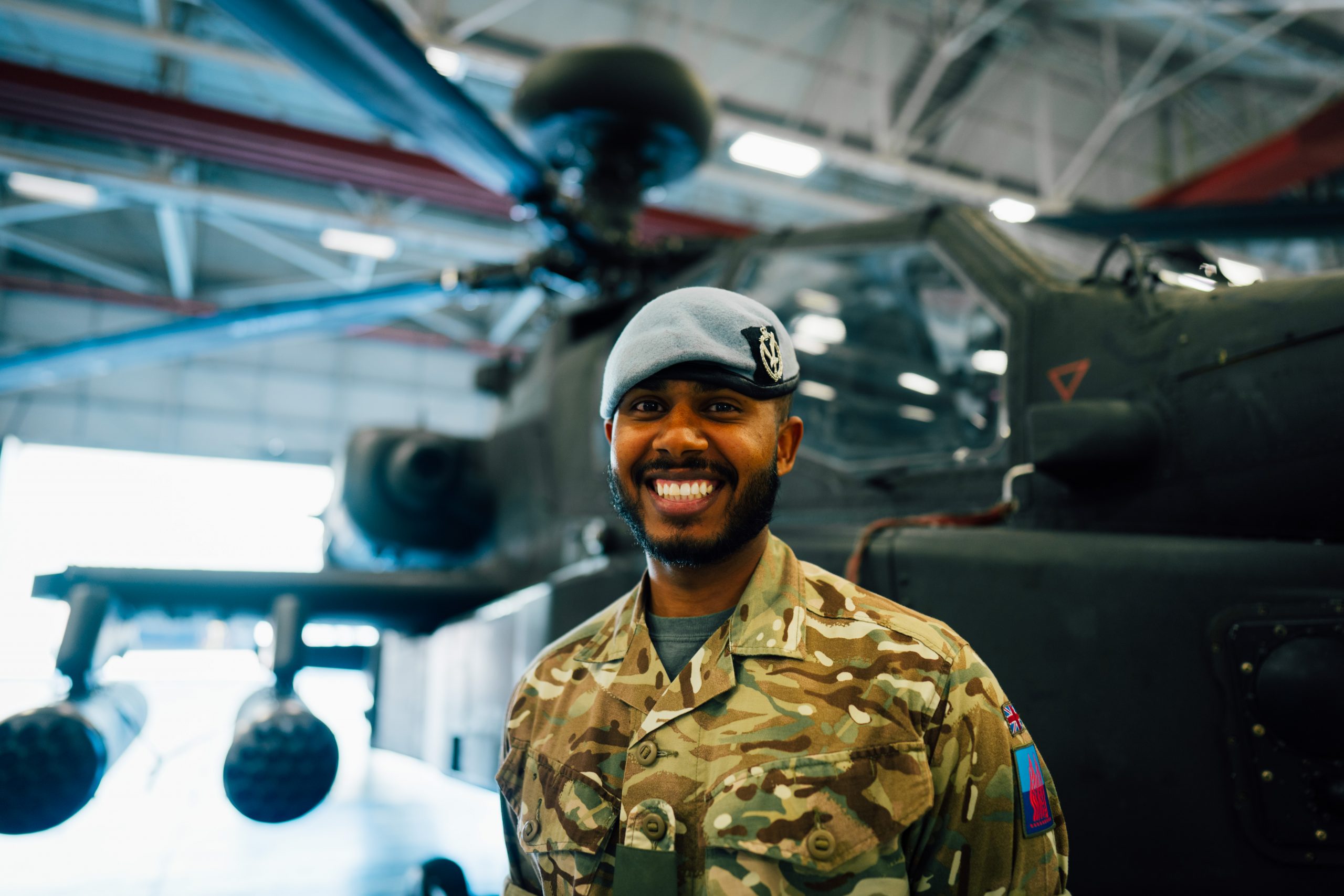 ON THE BALL: Air Trooper Munib Sheikh joined the army in 2015, after he took part a three-day army camp in the Queen Elizabeth barracks in York (Pic credit: Capt I Maclennan 4AAC)

AS A teenager, Air Trooper Munib Sheikh dreamed of becoming a professional footballer.

Growing up in Pakistan, Sheikh idolised Portugal footballer Cristiano Ronaldo for his work ethic and rise to the top of his field. The self-proclaimed “football crazy” teen was inspired to pursue his own dream of sports stardom.

When Sheikh was 16, he relocated to West Yorkshire to try and be a professional player. But fate had different plans and Sheikh is now a rising star in the Army. However, the 24-year-old has no regrets about his unexpected career path. The military has become his family, providing him with a range of opportunities and instilling him with confidence and a sense of belonging.

“Never be scared chasing your aspirations as it’ll lead you somewhere, as it has led me (to the Army),” he told Eastern Eye. “I love my job. It has given me everything – I owe it all to the Army.”

Sheikh’s journey began in 2015, after he was encouraged by a college tutor to join a three-day army camp in the Queen Elizabeth barracks in York. “It clicked that it was for me and I’d love to sign up for it and
see how it went,” he recalled.

Despite his enthusiasm, his knowledge of the Army was not extensive, by any means. His grandfather had fought in the British Indian Army in the early 1900s, but it was only when Sheikh applied to the military that he began to learn more about its history and what he could expect.

“I wasn’t big on the military growing up,” he admitted. “If you asked me five years ago, I would never have thought I would be in the army – but here I am.”

After being accepted, Sheikh began his basic training, but the transition from civilian life to military life was a challenging time for him, who admitted it was a “shock to the system”. In his fourth week, Sheikh made the decision to quit. He handed in his letter of discharge, but was taken aside by a corporal who helped him to reevaluate his situation and make the decision to remain and finish his training.

“He is one of the most influential people in my career. If it wasn’t for him, I wouldn’t be here now,” Sheikh revealed. “I made the right decision.” He added: “If you go through basic training, just remember it is all a big game – don’t put yourself down, and if you have a bad day, don’t worry. Tomorrow is a new beginning. The people are there to mould you from civilians into soldiers and you’ve just got to get your head down and work hard. By the time you’ve finished your training, you are a better person than what you were a couple of months ago.”

Despite the initial challenges, Sheikh’s military career has gone from strength to strength. He is now a qualified aviation communication specialist (ACS) and is looking to train as an All-Arms Physical Training Instructor in the future. His role as an ACS is an important link in the chain to pass information to and from specific aircrafts. Without communication, the role of the aircraft becomes redundant, so Sheikh is vital to its operation.

In addition to progression in his career, Sheikh has had opportunities to travel the world with the armed forces, including stints in France and Austria. He has also taken part in adventure training courses, such as mountain biking and paragliding. The activities are designed to enable people to take themselves out of their comfort zone, proving they can do challenging things in environments they are not necessary comfortable with, he said.

“There are always career courses and activities that you can look into,” Sheikh said. “There are plenty of options to help build up your portfolio – you’ve just got to search for it, ask questions and it is all there for you.”

Sheikh is a practising Muslim. Admitting that he had no concerns about the Army not accommodating his religious needs, he praised the military for being inclusive and considerate. “There was a point during my basic training when it was Ramadan and I had to fast,” he said. “When I was fasting, you aren’t supposed to take part in exercise – depending on your personal needs – but they gave me an option to either stay behind a month to complete my fasting or I could complete my training and continue with my fast.”

While fasting during weekends, Sheikh had all the available necessities in the cookhouse and he had access to a prayer room with a prayer mat. “It’s been the same throughout – they (the Army) were very accommodating and there was no issue,” Sheikh said.

Although his older sister has recently moved to the UK to pursue a teaching career, Sheikh’s parents remain in his native Pakistan. His mother was initially sceptical of his career choice, but his parents are now both “immensely proud” of their son. “They think it is the best thing I’ve ever done for myself,” he said.

And although Sheikh is keen to further his career in the military, he admitted football was never far from his thoughts. Luckily for him, the army provides him an opportunity to play the game. “I play football for my regiment, we play every season,” he said. “But if it wasn’t for football, I wouldn’t be in the British Army as it was the only reason I moved to the UK. It (my football career) didn’t work out but here I am – and I’m happier than ever.”

Army Of The Dead director Zack Snyder is all praises for...